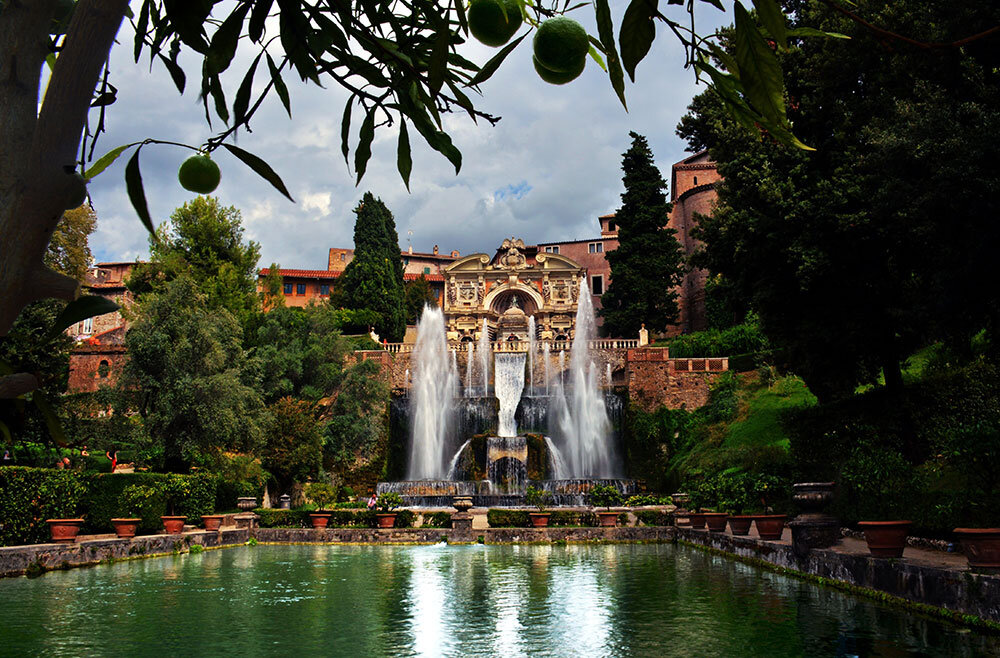 One of Latium’s villas, a Unesco heritage site, is a masterpiece of the Italian garden with its impressive concentration of fountains, grottoes, water features and hydraulic music. Cardinal Ippolito II d’Este, after the disappointment of not being elected Pope, revived here the splendour of the courts of Ferrara, Rome and Fontainebleau. Governor of Tivoli from 1550, he immediately entertained the idea of creating a garden on the slope of the Valle gaudente.
The Villa was almost complete when Ippolito d’Este died in 1572. Further interventions in the 17th century were followed by a period of decadence, until Cardinal Gustav Adolf von Hohenlohe revived the splendour of the villa by hosting the musician Ferenc Liszt (1811-1886). Acquired by the Italian State, the Villa was restored and opened to the public in the 1920s and 1930s.

The complex, consisting of the palace and the garden, was built by Pirro Logorio on behalf of the Ferrarese Cardinal Ippolito II d’Este, who had become governor of the Latium city in 1550 and wanted a residence befitting his new status.

The complex forms an irregular quadrilateral and covers an area of approximately 4.5 hectares. The plan of the villa is irregular because the architect was forced to use some parts of the pre-existing monastic building.

The garden of Villa d’Este extends along steep slopes that descend from the palace to a flat terrace in the manner of an amphitheatre. Each of the five main transverse axes of the garden ends in a fountain. This arrangement of axes and modules was adopted to conceal the irregular shape of the garden, to modify the relationship between transverse and longitudinal dimensions through an optical illusion, and to give the palace a central position, although it is out of alignment with the architectural complex.

Our tour of Lazio includes a visit to the Villa. In fact, on the third day, after lunch you will have the pleasure of admiring the architectural and botanical wonders of this place. You can find all the information about the Lazio World Heritage Tour at this link: https://www.spiritualtour.it/en/lazio-tour/